Would you pay $1 to send an email?
Facebook thinks you will. The social media giant has, quietly, started charging you when you send messages to some people not on your friends list.

Cheesestix.com tested it out and took a screenshot below. 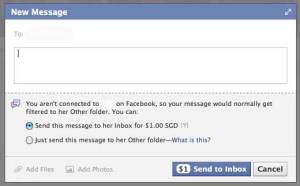 Facebook announced in December that it would be testing the charge in the U.S. Facebook says it’s designed to prevent spam, but might this be a way for companies to drop a few dollars to specifically target people with a hefty following?

Apparently, depending on how Facebook popular you are, it can charge up to $15 to reach someone’s inbox.